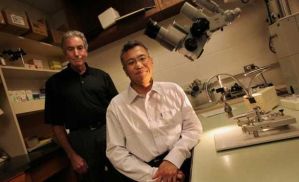 A couple years ago Dr. Jerry Silver of Case Western Reserve University in Cleveland achieved a big leap in regenerative medicine for spinal cord injury with his work on Functional Regeneration of Respiratory Pathways After Spinal Cord Injury showing that a bypass graft and ChondroitinaseABC (Chase) enzyme for anti-scar sustained remarkable recovery of diaphragmatic function in paralyzed animals. Articles began hitting the press today with the unprecedented research accomplishments including the latest one from Plain Dealer Science writer, John Mangels. According to the Plains Dealer article, Silver’s and Lee’s research is “exceptionally rigorous,” and the pair’s findings have “potential clinical importance,” said neuroscientist Phillip Popovich, director of Ohio State University’s Center for Brain and Spinal Cord Repair.

Phillip Popovich is a Scientific Advisory Board Member for Unite 2 Fight Paralysis. “More importantly is the fact that these findings should make it to clinical applications for the spinal cord injury community” said Chris Powell of the Advocate Research Committee at Unite 2 Fight Paralysis. Also commenting on the studies was Dr. Elizabeth Bradbury of Kings College London with the Society for Neuroscience. “Several challenges must be overcome before the therapy can be trialed in patients and brought to the clinic,” she said. “Nevertheless this is a remarkable advance which offers great hope for the future of restoring bladder function to spinal injured patients and if these challenges can be met we could be reaching clinical trials within three to five years.”

The Journal of Neuroscience Abstract is HERE.

Supraspinal means from above the level of injury – from the brain. That means certain signals that affect the bladder got past the gap in the cord, by way of the surgical bridge; some axons grew “remarkably” long distances and restored proper behavior of the lower urinary tract to not quite normal, but quite good. They used adult rats with complete thoracic cord transections that have been bridged by a combination of multiple peripheral nerve autografts (PNGs) covered by an acidic fibroblast growth factor (aFGF)-laden fibrin matrix plus ChABC [aka chase] delivered to the graft and at the graft/host interfaces. They provide physiological, anatomical, and pharmacological evidence of a surprising degree of regeneration from particular brainstem centers past the distal graft/cord interface, with some axons reaching all the way to lumbo-sacral levels and with return of bladder control.

Three to six months after the surgeries the team began measuring urine output from all the animals, using a metabolic cage that recorded frequency of voiding, and volume. They ran bladder dynamics tests, electrophysiology tests, and later, anatomical studies to see what occurred. They kept score by the number of times an animal was able to urinate in a set amount of time, and by weight of bladder. As expected, the transaction animals (no treatment, totally paralyzed) were at the lowest level of voids, highest level of bladder weight. The sham group (not paralyzed) was at the top in voids, lowest in weight. What was found was that each of the treated groups had better bladder function than those with no treatment but that the group with the nerve graft, chase and aFGF was much better than the others, and even more so after six months. Improvement over time is due to the time it takes for nerves to regenerate and recovery to blossom.

The ChABC shot (Chase) breaks the scar down, but the growth factor aFGF may have helped quite a bit. Why did this particular combination therapy {chase, aFGF and nerve graft} allow for such robust axonal regeneration well beyond that of our previous studies in which we used ChABC (chase) and single, longer bypass PNS bridges that were directed just above ventral horn gray matter? They suggest that maximizing surface area with the use of multiple grafts coupled with the enzyme effectively increases access to the distal white matter, which, in turn, can permit long-distance regeneration. In addition, the use of FGF may have a variety of beneficial synergistic effects. The FGF family members have multiple functions, including their capacity to modulate cell proliferation, migration, differentiation, and survival. Therefore, the application of aFGF in our repair strategy is important not only to facilitate axonal growth in general but also to help allow axons to grow straight, especially at the entrances and exits of the PNG. Silver’s group thinks the FGF may help by altering production of inhibitory factors at the site of growing axons, thus allowing them grow more easily in the area of damage.

In addition, they identified a subset of neurons situated primarily within the brainstem and reticular formation (and which are known to play important roles in bladder function) as well as the propriospinal system that can regrow lengthy axons once a permissive environment that allows them past the glial scar is provided. They saw no evidence of regeneration by cortico-spinal or rubro-spinal axons (unlike the results by Cheng et al., 1996), which is one possible reason for the limited recovery of locomotor function (Basso–Beattie–Bresnahan score improved from 2 to 7 in the triple-combination). “What was especially surprising and exciting was that a subset of nerve cells situated largely in the brainstem could slowly re-grow far down the spinal cord once a permissive environment that allowed them past the site of the scar was provided,” Silver said. “What endows these particular neurons with such an innately high re-growth capacity is unknown but will be an extremely important area of research in the future.”

Some types of long axons apparently grew the length of the spinal cord. There may also have been a rewiring of the thickly woven network of shorter axons in the cord. The central pattern generator (CPG), which is involved in stepping and treadmill training, may have kicked in too. The scientists do know that the recovery of bladder function was related to restoration of brain input; by re-cutting the spinal cords of the treated animals, the gains in bladder function disappeared.

The current study provides an experimental framework for stimulating functional regeneration after acute severe SCI. Micturition control is complex and recovery takes a long time, but, rather remarkably, it would appear that certain primitive brainstem-mediated functions lost to SCI such as respiration and urination do possess the capacity to rewire themselves even when a relatively small number of axons can be induced to regenerate beyond the glial scar. However, and importantly, we do not yet know precisely how many and where beyond the lesion the functionally relevant synapses need to be re-formed. The critical synapses may occur within the interneuronal pool just beyond the graft in which most fibers end.

The future challenge will be to provide even more favorable environments and increase the intrinsic growth potential of these particular supraspinal neurons to facilitate more substantial and rapid axonal regeneration to further enhance recovery of these but also other systems not only after acute but also after chronic SCI. The novel combination treatment allows for remarkably lengthy regeneration of certain subtypes of brainstem and propriospinal axons across the injury site and is followed by markedly improved urinary function. Our studies provide evidence that an enhanced nerve grafting strategy represents a potential regenerative treatment after severe spinal cord injury.

Dr. Silver will be speaking at the Working 2 Walk Science Symposium in Boston September 27-28, 2013. He’s a career scientist that has spent a lifetime working toward regeneration and recovery from spinal cord injury. It’s a medical first in the field of nerve regeneration after decades of work and sometimes dashed hopes.
Society for Neuroscience
Case Western Reserve University:

More information about the work of Dr. Jerry Silver can be found HERE. The research was supported by the National Institute of Neurological Disorders and Stroke and the Cleveland Clinic Foundation.